The Amazon: A Class for King of Kings

So in my forthcoming game world and campaign King of Kings, I intend on using B/X more or less intact (well, to be more precise, using Old School Essentials since it is really the best presentation of B/X that there has ever been). In many ways, this decision (which I already made several days ago), was to curb my incessant need to tinker on game rules and classes to reach a form that I find absolutely perfect. Most of my games up to now have been ran in a vague B/X hack where I felt the need to build setting-specific classes and character options for every damn game. Thought to myself, well yknow using this hack with setting-specific classes is all well and good, but putting together custom classes and custom equipment lists ends up taking up so much of my time and energy that I end up lacking in the uh, actual game material department (though I make up the difference by incessantly writing stuff and doing improvisational DMing more or less). So, with King of Kings I decided to not mess with OSE. Well, okay... with the exception of the non-human/demihuman races. The Tolkien pastiches that are the DnD elf, dwarf, and halfling didn't quite fit the general vibe of the King of Kings setting, so I decided to reskin and modify them, sometimes only slightly, sometimes rather heavily. In the end, I ended up with races that more or less resemble the three demihumans in general ways (as in, conceptually). Building these new race-classes was a bit of a concession to my hunger for tinkering on game rules, but it also served a more crucial purpose to really show the setting in the game rules. So yeah uh, without further ado, the first of these race-classes: the Amazon! 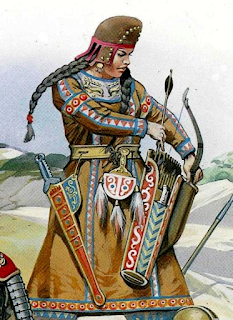 Amazons are a race of tall, lithe, and athletic warrior women native to the barbaric lands on the edges of the Enlightened Empire. The amazons of the deserts, steppes, and forests to the north of the Empire are the most prominent in King of Kings, but there is another community of warrior women in the islands to the south as well. They are almost fully human in appearance, but always tend toward being taller than average human women, and are rather susceptible to physical mutation due to the singular biological quirk that sets the amazons fully apart from humankind: parthenogenesis.
(For those not really familiar with the term, parthenogenesis (Greek for "virgin creation") is a form of asexual reproduction employed by certain multicellular species (this is different from the more common kinds of asexual reproduction used by single celled organisms) where an embryo is developed without the need for actual fertilization by sperm. One of the more famous real world animal species that reproduces in this way are the all-female whiptail lizards. There are technically two main kinds of parthenogenesis: one where it is induced by mating with a male of another species, and one where it is induced by acting out the motions of mating with another member of the all-female species. So yeah uh, essentially the reason why amazons are all-female is because they reproduce using parthenogenesis, but the ensuing lack of genetic diversity has resulted in physical mutations being rather common among the amazons. Okay end of this biological aside.)
Amazon society is built around familial clan lines, where daughters are trained from birth as hunters and markswomen, to aid in the defense of their semi-nomadic communities and hunt the wild horses, camels, and deer of the steppe and taiga. Rituals to prove worth, strength, and maturity are a central fixture of amazon culture, and to those ends a common practice among the warriors is to sell their services to other barbarian tribes or to the people of the Enlightened Empire they live on the edge of. Thus, amazons are some of the most respected wilderness guides the whole world over, and are a not uncommon sight in the border satrapies. 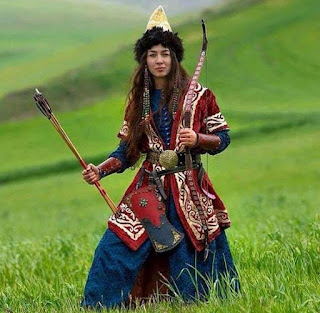 An amazon with at least 13 in one prime requisite gains a +5% bonus to experience. If both DEX and STR are 13 or higher, the amazon gets a +10% bonus.

Barbarian Guide
Amazons have a close familiarity with their wild barbaric homeland (the specific land depending on whether they are a northern or southern amazon). They are considered “reliable guides” within their home region, and can navigate across it without getting lost. Once every three levels, an amazon character may obtain familiarity with another region, so long as she has spent significant time there. Combat Amazons can use all types of weapons and can use leather armor, chainmail, and shields. Foraging and Hunting A party with an amazon succeeds at foraging with a 2-in-6 chance and finds prey when hunting with a 5-in-6 chance. Missile Attack Bonus Amazons’ training with bow and arrow gives them a keen eye and a steady hand. They begin play with a +1 bonus to attack rolls with all missile weapons, which increases to a +2 at level 3 and a +3 at level 8. Mutations Amazons reproduce through parthenogenesis, and thusly they are susceptible to unusual mutations. Roll 1d8 and consult the table below to determine the mutation the amazon begins play with.
1. Albino: -2 to saves against spells and magical effects.
2. Club Foot: -2 to DEX and -3% to MS.
3. Cycloptic: -1 to all attack rolls.
4. Deformed Face: -3 to CHA.
5. Deformed Hand: -2 to attack rolls with two-handed weapons.
6. Hemophiliac: 1 damage per round after taking damage until wound is bound.
7. Unnaturally Wide Eyes: -1 to-hit in bright light, but can see in dim light.
8. Weakened Immune System: -3 to saves against disease and poison.

In regions they have familiarity with, amazons can use the following skills with the chances of success shown below.

Hiding in Undergrowth (HD): Requires the amazon to be motionless; attacking or moving ends the period of hiding.

Move Silently (MS): An amazon may attempt to sneak past enemies. If an amazon makes a ranged attack while hidden, a successful MS roll followed by a successful HD roll allows them to hide again. After Reaching 9th Level An amazon may establish a fortress and a tribal state that owes vassalage to the head of her clan. Her fortress attracts 3d10 amazons and other barbarians, and controls any land that she can clear around it. 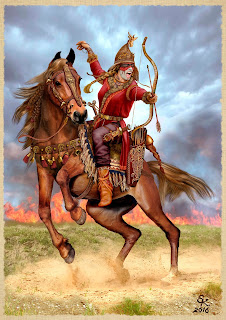 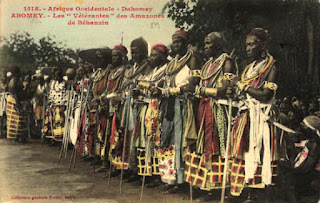 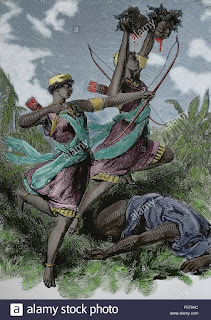 To me, the amazon functions almost as a replacement for the dwarf... a fighting-type class with additional features that make it very useful in a specific type of environment (underground/dungeon for dwarfs, familiar wilderness regions for amazons). It also does function like a ranger class for the King of Kings game. I'm pretty sure a mutated warrior woman is much more interesting than some LOTR expy dude anyway. I'm really quite glad with how this class turned out! I think that the thief-style skills are a good part of the class, even if it does seem a bit out of place... it was partially based on the Old School Essentials barbarian class from the Advanced Fantasy Genre Rules, but I was trying to also build them to allow for potentially interesting combinations with the more combat oriented features of the amazon, like the missile attack bonus. Now, just to be clear, this has not been playtested yet, although I am intending on making this class completely available to my players when I begin running King of Kings.

Posted by Marsworms at 6:40 PM