Be a Good Listener. Encourage Others to Talk About Themselves.

So you know how beholders are big spheres all covered with eyes? Well what if they were all ears!
This is just a monster that I'm writing for fun based on an idea that came to me a few days ago. I'm (probably) not gonna use it in King of Kings, so this isn't going to have any of the assumptions of that setting in it. Just a fun unique monster for old school roleplaying games! 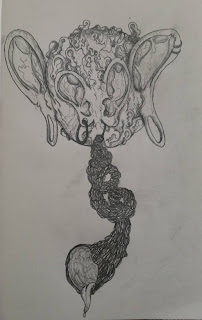 Eavesdropper
Armor Class: 14
Hit Dice: 6
Attacks: 2 bonks (1d4) or 1 spell
To-Hit: +3
Saving Throws: D10/W11/P12/B13/S14
Morale: 6
Alignment: Neutral
XP: 500
Number Appearing: 1d3 (1d6)
Yeah I cut movement from this what of it? I'm not gonna bother with that stuff anymore.
Bonk: The only real mode of attack for the eavesdropper is a bonk from its hard but flexible trumpet. If the trumpet is torn off, the eavesdropper loses the ability to make melee attacks and must immediately make a morale check.
Flight: Eavesdroppers can fly with the use of their ear-wings. They cannot magically float, and must flap their wings to even remain in the air. This produces a noticeable noise similar to a canvas flapping in the wind.
Sound Sensitivity: The eavesdropper is sensitive to loud noises, being stunned for 1d4 rounds if it fails a save vs. paralysis when it hears a very loud sound (such as a cave-in, explosion, tyrannosaur roaring, etc)
Sound-Stealing: Eavesdroppers are unable to produce their own original sounds, and instead must steal sounds from others or from their environment. The eavesdropper can steal the words right out of a person's mouth as they are spoken. Eavesdroppers can steal any normal word, phrase, or sentence as it is spoken. If it is attempting to steal a magical spell as it is being cast, the spellcaster must make a save vs. spells to not lose the spell immediately. After stealing a sound, it can repeat it with complete perfect accuracy, as if it was just spoken or produced. Once it repeats a sound, it loses it forever.
Spellcasting: If the eavesdropper stole a spell, it is able to cast it. It must choose between casting a spell or bonking. There is a 2-in-6 chance that the eavesdropper has already acquired a spell. Determine spells acquired randomly.
Eavesdroppers are anxious and self-conscious little things no bigger than a barrel or the top half of a human body (torso+head), every inch of their spherical bodies covered in ears of various sizes. They are cursed with an inability to speak their mind or use their words, and must instead steal words from others in order to repeat them with perfect precision. This leaves them terribly depressed, feeling that they are unable to assert themselves or have any real independent thoughts, doubly so because each precious sound that they hear is immediately lost upon being repeated. The saddest of all eavesdroppers are those who dwell in cavern depths, incessantly repeating the dripping of water off of stalactites. Certain very clever eavesdroppers are able to piece together sentences from words and phrases they've heard, but since they lose each sound upon repeating it this is rather fleeting. They have beautiful minds filled with thoughts and ideas, and no way to express them.
Their ability to steal words, including the words of power that make up magical spells, makes them quite sought after by sorcerers and spymasters of all sorts. Since the eavesdropper is unable to say how it is feeling, however, these are mostly very unequal relations. A spymaster with an eavesdropper servant may keep it in a cage, while a heinous sorcerer may trap the eavesdropper in a box of complete silence. Kinder masters feed their eavesdroppers words for them to repeat, effectively giving their ear-slave the gift of speech. Most eavesdroppers don't like the situations they are forced into.
The young of an eavesdropper are called evenings, and appear as a complete smooth sphere of skin with two disproportionately large ears. They cannot yet fly, and crawl on the ground with their ears. Eavesdropper parents will often hide a nest somewhere they think is safe and return to give their young sounds to repeat in order to develop their noise-trumpets.
Posted by Marsworms at 6:12 AM

Email ThisBlogThis!Share to TwitterShare to FacebookShare to Pinterest
Labels: B/X, monsters, my art