The Nume-serpent (A Monster for King of Kings)

Just a nice little monster for today... a bit of creative block has me caught between different ideas right now, but I've had adapting this little guy to King of Kings on my mind for a week or two. I say "adapting" because this is a new version of a monster I came up with for a setting years ago, a design that has stuck with me for quite some time. Also this post features some of my own art!
To the east there sits the march of Numistan, the Land of Coins. A mountainous and looming land, it is bisected by the domain of the King of Kings of the Enlightened Empire on the western flank and the kingdom of the southern Dog-Headed Men on the eastern flank. Its rocky outcroppings are rich with gold and silver, and lapis lazuli to boot, and so the mountain valleys have been fought over by enemy empires and feuding kings over the centuries. Its air is filled with the smoke of burning villages and coin mints. Great statues carved into the sides of mountains gaze across the horizon like blind gods. Ancient cities reborn with every conquest sit in isolated mountain valleys, their walls bedecked with rugs. 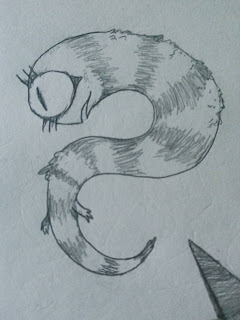 In the valleys of Numistan, there dwells a creature called the Nume-serpent. This furry little worm has a single eye which rolls around in its socket as it wriggles in the dirt and hides in the tall grasses. They can imitate sounds to trick their prey (mostly rodents and insects), and sometimes have been known to mimic the sounds of the hammers that bend the coins into shape, or the crackling of fire, or misunderstood snippets of speech they hear on the edges of human settlements. Nume-serpents despise gold and all things that hoard gold (whether greedy men, hungry ants, or magpie gryphons). They seem to panic whenever they see the glittering stuff, and are known to bury coins or chunks of gold in a desperate attempt to stop anything from finding it. Seekers after gold who travel through Numistan say that the surest way to find the glittering stuff is to see where the nume-serpents are not, or where they flee from in disgust. The nume-serpent is an anxious little thing.
The nume-serpent is sometimes kept as a pet. The merchants of the mountain passes and the desert roads bring forth their caged nume-serpent to see whether coin is true gold or not; if a coin is a forgery, the nume-serpent will likely curl around it rather than flee in terror. The nobles of the lands west of Numistan find the little creatures a fun novelty. They wear them draped on their shoulders as living stoles, and teach them silly little phrases to show off their mimicry, and put them in silly little hats. The serpents likely resent this. Spies and assassins keep nume-serpents for their weak venom. It is not a deadly nor paralytic venom; it simply weakens one's muscles slowly. 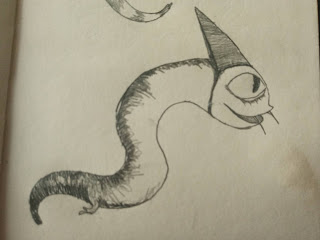 Nume-serpent
Armor Class: 11
Hit Dice: 1-1
Attacks: 1 x bite (1d6 + weakening venom)
To-Hit: +0
Movement: 90' (30')
Saving Throws: D12/W13/P14/B15/S16
Morale: 4
Alignment: Neutral
XP: 7
Number Appearing: 1d6 (2d6)
Atrophy Venom: The venomous fangs of the nume-serpent secrete a soft venom that weakens muscles. If successfully hit, save vs paralysis or take -1 to all rolls that involve physical exertion. Take an additional -1 every subsequent turn.
Aversion to Gold: When presented with gold in any form, the nume-serpent will attempt to flee or hide. If gold is presented with no other creatures around, the nume-serpent will attempt to bury it.
Mimicry: Nume-serpents are able to imitate with incredible accuracy any sound that they hear. The imitation is made more accurate just by listening to the sound repeatedly.
The nume-serpent is a new rendition of a creature concept I came up with for one of my earliest D&D worlds. At the time I called it a gnomesnake, and it was a venomous one-eyed furry serpent wearing a gnome hat, intelligent and living in small villages in tall grasses. These are admittedly less intelligent than the original version, but I think the concept here is made even more interesting by the connection to gold and such... In my mind, the gnomesnake, now nume-serpent, is an iconic creature of mine, at least to me. I'm happy to have them in King of Kings; the first time I've used them since at least five years ago.
Posted by Marsworms at 5:27 PM