Something that's been in the back of my mind for the past couple of days is making a combat system for a paleolithic/neolithic type game based on combat in the good ol' TSR war-game Chainmail. This has nothing to do with anything really, and in fact I have a bunch of other things I probably ought to be working on, but yknow this was on my mind so I had to bring it into the world. Maybe I could do some kind of Stone Age game at some point? Wouldn't wanna step on Pariah's toes too much! 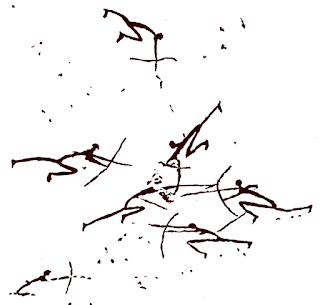 So, the basics: the core of this is based on the Chainmail man to man table, but it also includes missile attacks and attacks and defenses from animals since I figure those would likely also be prominent in a Stone Age type game. Its a weapon vs. armor table, where the target number determined by the combination of the attacker's weapon and defender's armor is to be rolled equal to or over on 2d6. Could use it basically as a replacement for the d20 roll in the "Alternate Combat System", or using it straightforwardly with the Chainmail man to man system, do whatever really.
Chainmail also has a separate combat system for fantasy combats between fantastical/magical opponents, which I could totally see as an alternative to the modified man to man table I wrote up below. I prefer the idea of the modified man to man table though, because in the kind of culture that would exist in a late paleolithic/early neolithic environment things like weaponry would take more precedence than training or any kind of superhuman ability; no heroes or superheroes in the Stone Age! Perhaps some things could give a bonus, like having taken part in an empowering collective ritual? I don't know.
Since this is assuming the context of the Stone Age, specifically the late Paleolithic into the early neolithic (think the time around the building of Göbekli Tepe in what is now Turkey; I was actually writing this with early neolithic Anatolia in mind, or a more fantastical version at the very least), don't have to worry about horses, don't have to worry about metal armors, I also don't think have to consider shields much? I'm not aware of shields in the neolithic or paleolithic, if there are shields maybe they give a small bonus or something, like idk minus 1 to attacker roll or somesuch. Instead, most armors are animal skins of different types, with the only entirely human made armors being textile and lamellar made from bone and wood. The different animal skins/hides/leathers on the table do double duty for both those actual animals in combat and humans wearing the skins of said animals. I just thought that that would be an interesting way to include animals and people in the same combat system while also communicating a type of shamanic or animistic element to the worldview of the people in the game. I was thinking of the practice of the berserkers in old Norse Scandinavia and of figurines like the Lowenmensch that combine human and animal features and the general preponderance of animals at places like Gobekli Tepe and Catalhoyuk. Maybe that could be expanded for specific types of animals, like wearing a lion skin gives you traits of a lion in combat, or it could be a bear, or a crocodile, or an ostrich, whatever.
Bird Skin: Primarily intended for flightless birds like ostriches and terror birds. Obviously none of those live around ancient Anatolia, but yknow I can include whatever prehistoric animals I want to include.
Fish Leather: I think I'd use this for any aquatic creatures and for the skins thereof. Fish leather is a real thing you know! I don't think it would be very effective at stopping most things, but who knows.
Thin Beast Hide: Originally I called this tier "Herbivore Hide", with the idea that herbivores are meeker, etc. Functionally, however, I think differentiating between thin vs thick is probably a better idea. Thin beast hides would be deer, antelopes, probably rabbit skins I bet, but also most carnivores such as lions.
Textile Armor: I feel like a lot of the time textile armor gets ignored! Textiles, quilted armor, and padded armor were much more common historically than leather armor was. I have no clue if textile armor was really used much in the neolithic, but I figure since people were able to make textiles by this point it isn't exactly impossible.
Thick Beast Hide: Refer to thin beast hide, above. Elephants, hippopotamuses, rhinoceroses, oxen, I have no idea how thick their hide actually is compared to those but I feel like I'd put bears here too; they're pretty hardy animals! 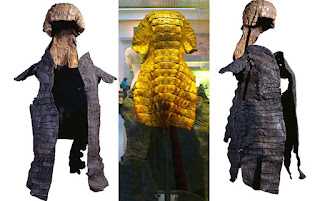 Reptile Hide: Self explanatory. Again, no real prehistoric basis for this, but I do have a historic basis, in that reptile leather was used at times in certain ancient and medieval societies, like the ceremonial crocodile leather armor from Roman Egypt above. Also reptiles are a staple of prehistoric stuff.
Bone/Wood Lamellar: Again, no real prehistoric basis, but all of the technology to make lamellar with materials like bone and wood were around so I just sorta assume that they had it. Lamellar, if you're not aware, is small plates of material, in this case bone or wood, together forming armor by being connected to one another.
Turtle Shell: Self explanatory.
Also I think the attacker weapons are mostly self explanatory. I included animal natural weaponry because I wanted to integrate animals and humans into the same combat system like I mention. I realized after writing the table that I didn't include anything for unnaturally large arthropods, which was an unfortunate omission! Big bugs are a staple of all tabletop roleplaying games, especially ones that I run; I think I would have them range from thick beast hide to turtle shell depending on the species, with either beak or crocodile bite for their attack again depending on species. What are mandibles if not a beak but sideways?
With carnivores and herbivores no longer divided, I was thinking that carnivores should get some sort of bonus. Perhaps extra attacks, or a penalty to the attacker's roll? I think that could work. This was partially suggested by a certain Gus L. Carnivores, no matter what type of hide they have, put a penalty of 1 or 2, depending on their size, to their opponent's roll. Terror birds get that minus 1, wolves get that minus 1, bears and lions get that minus 2, a crocodile would probably be minus 2 also which would make someone fighting a croc with fists impossible to succeed but yknow that's okay, who do you know that won in a fist fight with a crocodile? 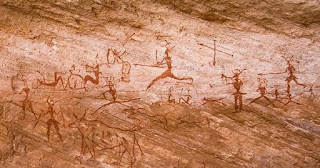 Other ideas for this that are unrelated to the modified Chainmail man to man combat: EXP from wasting food? No currency in this world, trade done through ritualized barter between communities but inside communities stuff is just shared communally, etc. Things are given calorie values, and you have to eat a certain amount of game calories when you get exhausted, but to gain EXP you have to waste calories in the form of a ritual sacrifice or an ostentatious feast or by giving it to other people. No combat EXP; you can get the EXP from killing a deer or a shark or whatever by bringing the quarry back with you to your encampment or your local ritual site. Perhaps the best way to earn EXP would be sacrificing food in a ritual; go to a stone temple complex a la Göbekli Tepe and give up your quarry. I think I'd likely supplement that with EXP for exploration, like finding new locations and stuff. I've actually had EXP for food in some stuff before, but I like the idea of this one the most of the different ways I've implemented it. No clue what EXP or leveling would even really do for you though, when you can't really improve to hit chances or whatever since its a weapon based system. Maybe ability scores matter a lot and advancing in level improves ability scores? IDK!!
Other stuff for me to consider I guess: possible inclusion of ritual cannibalism? rules for taking prisoners? Maybe the ones that are already in Chainmail are good enough. It seems that massacres were rather common in the occasional circumstances of prehistoric warfare, so maybe that should be the assumed result of any kind of combat between human foes. If I wanted to include the extremely fantastical, like maybe super science stuff or shamanic magic or whatever, like if this were a sword and sorcery, erm, spear and sorcery type setting perhaps, how would that integrate into all this?
Honestly, I don't really know what I'll do with this, if anything. It's not nearly as interesting an approach to prehistoric roleplaying as Pariah; really, go check out the link at the top! And check out their amazing blog too while you're at it.
Posted by Marsworms at 5:53 AM